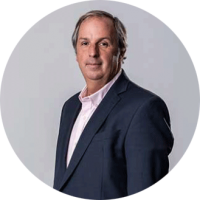 German Ranftl is a Public Accountant from the University of Buenos Aires graduating in 1990 and has a Masters in Business Administration from CEMA. He spent nearly 11 years in the banking sector, including eight years at ING Barings as a Vice President in Corporate Finance and Investment Banking, previous to that he had work for Bank of Boston. Since 1998 and for five years he was CFO of Supercanal SA the third largest cable company of Argentina with also operations in Spain, Bolivia and Dominican Republic.

After that period of time he was Vice President of Integra Investment SA a consulting firm with many international and Argentine transactions in M&A and Capital markets and debt restructuring. In 2007 he was appointed Chief Financial Officer of EDEMSA and restructured a debt of USD 160 MM, consequently Edemsa was part of a reverse takeover of a listed company in AIM London Stock Exchange and German was CFO of that listed company for 11 years, mainly Andes Energia PLC was primarily operating EDEMSA and HASA, electrical distribution of Mendoza Province, Hydro electrical Plant 60 MW and oil areas in Argentina and Colombia, that have been acquired by International Bidding process.